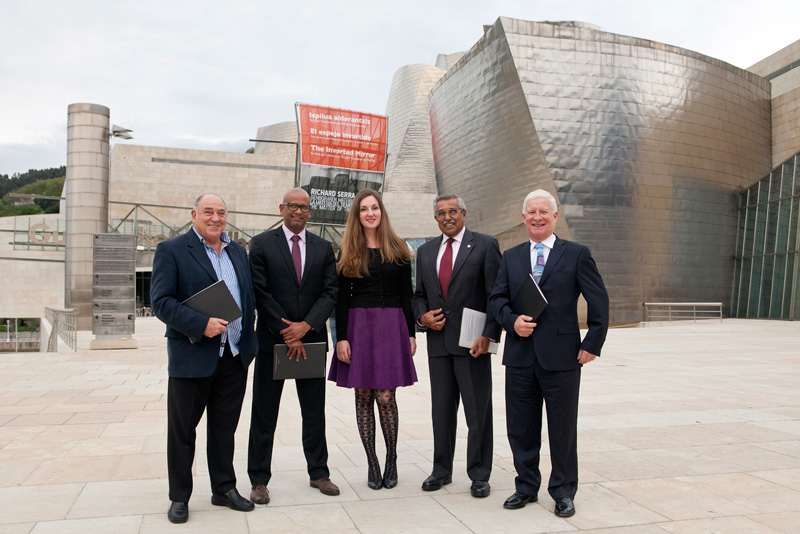 Ronnie Kasrils is a South African retired politician and prize-winning author who has played an important role in the liberation struggle against apartheid in South Africa. After the end of apartheid Mr. Kasrils served as Deputy Minister of Defence (1994-1999), Minister of Water Affairs and Forestry (1999-2004) and Minister of Intelligence (2004-2008). He was a member of the National Executive Committee of the African National Congress for more than 16 years.

Chris Maccabe is a former political Director of the British Government’s Northern Ireland Office (NIO) and a former British Joint Secretary of the British Irish Intergovernmental Conference (2000-2008). Mr. Maccabe was the head of political affairs at NIO during the negotiations that led to the Good Friday Agreement in 1998. He has also served as an adviser on peace processes to governments and international organizations in places like Kosovo and Tanzania. Mr. Maccabe was appointed a Companion of the Order of the Bath (CB) in 2004.

Ram Manikkalingam is the Director of the Dialogue Advisory Group and a Visiting Professor at the University of Amsterdam. He led the programme on International Security at the Rockefeller Foundation. Subsequently he served as Senior Advisor to the previous President of Sri Lanka on the peace process. Dr. Manikkalingam has been engaged in a number of conflict resolution efforts, including in Iraq and Northern Ireland. In Northern Ireland he has been involved in facilitating a dialogue that led to the decommissioning of weapons of the Irish National Liberation Army.  He has written extensively on issues such as conflict, multiculturalism and democracy.

Lieutenant General Satish Nambiar is a Former Indian Deputy Chief of the Army Staff. Served as the first Force Commander and Head of Mission of the United Nations Protection Force in the former Yugoslavia in 1992/1993. After his retirement from the military he was Director of the United Service Institution of India for more than 12 years (1996-2008). Lieutenant General Nambiar was also a member of the UN Secretary General’s High Level Panel on ‘Threats, Challenges and Change’ in 2003/2004. He is a member of the Indian delegation at the India-EU Round Table and the India chapter of the Council for Security Cooperation in the Asia Pacific (CSCAP).

Ms Aracelly Santana is a former Deputy Special Representative of the United Nations Secretary-General for Nepal (2008) and former Deputy to the Secretary-General’s Special Adviser on Post-Conflict Planning for Libya (2011).  During her 20-year career with the United Nations, her work focused on several regions of the world, and involved facilitation (South Africa, Colombia), peacemaking (El Salvador and Guatemala), mediation, electoral assistance, and United Nations peace operations (the Balkans, Nepal and Libya).  She has taught seminars on conflict prevention and mediation in the context of leadership courses organised by the United Nations and also the Folke Bernadotte Academy (Sweden) for senior civilian and military officials.

Fleur Ravensbergen is the Assistant Director of the Dialogue Advisory Group (DAG) where she manages DAG’s mediation operations. She also administers the office, accounting, and practical aspects of programmes. She previously worked for the Dutch Ministry of Development Cooperation, the Dutch Labour Party and a research agency where she managed research projects in the field of government

Ray Kendall is a former British law enforcement officer, formerly President of the European Union Anti Fraud Office and Honorary Secretary General of Interpol. Mr. Kendall also served as the Secretary General of Interpol for more than 15 years (1985-2000).  He served in the colonial police in Uganda and was a Deputy Assistant Commissioner in the Metropolitan Police, Scotland Yard, in the Special Branch. He is a holder of the Queens Police Medal and a Chevallier of Legion of Honneur (France).